The whole business of five-year, ten-year and x-year survival rates is marred by the fallacy of an early or late countdown. Ms. A has a breast lump, and she does not bother about it for four years. Then she decides to get it treated, and dies after two years, to be registered as a case that came late and therefore, died early. Ms. B has a similar lump, she gets treated within six months, lives for four years, and is registered, in contrast to Ms. A, as the case that came early and survived longer. In reality, Ms. A lived with her cancer for six years, and Ms. B for four and half years. The apparent longer survival of Ms. B was because the countdown on her cancer started earlier. An extended limitation of the above fallacy of countdown arises from the fact that no one  neither the patient nor the doctor  knows exactly when the cancer started in the body. 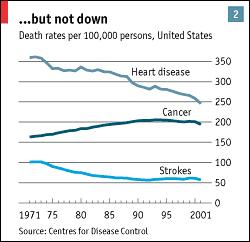 Park and Lee, in a detailed, highly critical article entitled, The absolute curability of cancer of the breast, and containing numerous graphs and mathematical calculations, concluded that (a) it could not be proved that the survival rate of breast cancer, using as an index the five year survival rate, was in any way affected by treatment, (b) treatment was quite ineffective in reducing the mortality from metastatic spread, and (c) if the treatment was in any way effective the so-called effectiveness could not exceed that required to increase the overall five year survival rate by more than 5% to 10%.

The year 2004 is fast coming to an end and  it will be worthwhile to have a look how the latest of cancer research and sure to cure medicines have effected the cure rate. We place before you the following facts:

We just left behind the year 2005. As far the cancer world is concerned, we feel that the "New York Times" of December 21st 2005 summed up through this report "New Drug Points Up Problems in Developing Cancer Cures" very nicely. We produce here the relevant portion from the report:

Although every field has suffered, cancer has had the greatest chasm between hope and reality. One in 20 prospective cancer cures used in human tests reaches the market, the worst record of any medical category. Among those that gained approval in the last 20 years, fewer than one in five have been shown to extend lives, life extensions usually measured in weeks or months, not years.

True cancer cures are still exceptionally rare. Medicines have been approved for colorectal cancer. Patients who take every one of the high-tech drugs has to spend, on average, $250,000, suffer serious side effects and gain, on average, months of life, according to studies.

Drug companies have been promising for years that gene-hunting techniques would yield targeted nontoxic therapies that melt cancer, but few cancer medicines fit that profile.

"There are all these myths having to do with cancer drugs," Dr. Steven Hirschfeld, an F.D.A. medical officer with expertise in cancer, said. "That they're very targeted, when in fact all these drugs have multiple targets. That they're nontoxic, when in fact the latest ones have their own set of side effects. And that they're cures, when they are not."